Previous Next
SWIFT on Azure: Modernizing Global Payments to Cloud with IBM MQ

Recent headlines in the news surrounding SWIFT came into prominence as major western powers started to impose economic sanctions upon Russia in the aftermath of its invasion of Ukraine.

What is more interesting is that the idea of cutting access to this global payments messaging platform is not new. Back in 2015, there were also talk of cutting-off Russia access to this system of payments when the first Ukraine crisis took place over Crimea. The then Russian Prime Minister, Dimitry Medvedev even signaled “unrestricted” response. In the same article, by Russia Today

Fast forward to March 2022, after Russia started its “special military operations” or “war” in Ukraine first, it is now subjected to partial cutoff to seven Russian banks from this same global payments system. Consideration were given to spare Sberbank and Gazprombank from this sanction because the former’s customer base includes a large majority of Russia’s population while the latter is responsible for facilitating international energy payments to European customers.

So what exactly is SWIFT. It stands for the Society for Worldwide Interbank Financial Telecommunication, is a global messaging system for financial transactions that connects more than 11,000 banks and other organizations in more than 200 countries and territories. While it doesn’t handle actual money transfers itself, it is an essential part of the financial plumbing because it transmits transfer requests safely from one bank to the other, allowing the money to ultimately land where it is supposed to. 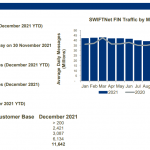 From Jan to Dec 2021, SWIFT processed more than 10 billion messages or transactions with an average monthly volume 44 million messages/day.

Now, even though SWIFT is meant to be an apolitical global organization, the issue starts because it is based in Brussels, Belgium, where it still needs to comply to local regulatory supervision.

The Russians and Chinese meanwhile setup their own competing payment messaging systems in SPFS and CIPS respectively in the hope of avoiding such reliance on SWIFT — being subjected to de facto Western control.

Without the scale and economics of a large distributed ecosystem though, the SPFS only have only 400 direct users with limited participation from foreign banks. CIPS on the other hand have a larger number with 1280 participants from 103 countries with a growing transaction volume (2.68m transactions worth 64 trillion yuan).

This leaves SWIFT as the dominant platform for performing international payments today. Barring any immediate change to the status quo, it would be of interest to look at the business use cases and technology architecture of this global messaging system. In an article from Russia Today interviewing an “expert in global financial markets” the following claims were made:

About the Author: Scott Treggiari

The Middleware Mash-Up 2022 has been recently announced and the focus on the event is Modernizing and Optimizing Your MQ Environment. As infrastructure modernization spreads, most organizations running IBM MQ are at some stage of modernization – [...]

MQ and Event Streams – get the best of both worlds

MQ and Event Streams - get the best of both worlds Tue, Sep 13, 2022 11:00 AM EDT SummaryJoin Matt Sunley and Alan Chatt from the IBM Product Management team to discuss the latest innovations in both MQ and [...]